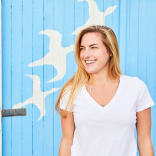 Marina Nazario is a freelance writer with a one-way ticket…

How To Spend 48 Hours In Port Stephens

The rides at Disneyland are great, but it also has some very magical and Mickey Mouse-shaped food you need take advantage of while roaming around the park.

No trip to Disneyland is complete without stuffing your face with an oversized turkey leg and inhaling a cup of Dole Whip before it melts.

Here’re eight foods you need to try as you wander through the happiest place on earth. Bring your appetite and good luck!

If you want to munch on something that’s totally American, grab a corn dog at Corn Dog Castle, Little Red Wagon or Stage Door Cafe in Disneyland. Weiner dogs are hand-dipped in cornbread, then lightly fried. You’ll taste that familiar sweet and salty flavour of a corn dog, but for some magical reason, Disney corn dogs taste infinitely better than what you’d find elsewhere (they must have a secret recipe for the batter). Disneyland corn dogs are popular, cheap and classic. Get ’em while they’re hot.

Why go to New Orleans to get beignets at Cafe Du Monde when you can have Mickey Mouse-shaped beignets from the Mint Julep Bar in Disneyland? Head to New Orleans Square to grab a few of these freshly fried, sugar-coated sweet treats and savour the best of both worlds.

If you have time for table service, Cafe Orleans serves Mickey Mouse beignets with a hearty scoop of vanilla ice cream. It’s the ultimate combo and you won’t be able to eat beignets any other way (or in any other shape)… that’s just an educated guess.

While you’re in New Orleans Square, grab a refreshing Mint Julep at the Mint Julep Bar to enjoy with your beignets. It’s a sugary, lemon-lime, non-alcoholic drink garnished with mint leaves. It might not seem like much, but it’s a Disneyland favourite that underwent a sophisticated makeover a few years ago.

The new recipe has a more citrus taste, rather than mint (the original recipe was a heavy on the mint, which gave it an electric green colour). But after a long day of running around the park, you’ll crave something this refreshing, no matter what colour it is.

Dole Whip is a one-of-a-kind masterpiece that’s a dairy free, pineapple flavoured soft serve ice cream. And it tastes like heaven. This Disneyland staple was created in the ’80s and has since formed a cult following among Disneyland park goers.

March over to Adventureland and make your way to the Tiki Juice Bar (we know you were heading there anyway). Expect to wait in a line that’s just as long as a theme park ride. And we’re not kidding when we say this is an iconic treat to snack on at Disneyland. It comes in a cup or as a pineapple float, so choose wisely (or order both). Don’t forget to ’gram it!

You can’t miss the Matterhorn ride at Disneyland. It’s a large snow-capped mountain designed to look like the real-life Alps that borders Switzerland and Italy. While the ride is a thrilling roller coaster, Disney also created a Matterhorn macaroon to complement it.

A coconut-flavoured macaroon is topped with a mini mountain of white chocolate (topped, not coated) and sprinkled with powdered sugar to make it look like snow. Yum. Matterhorn macaroons are the way to go and you can find them at Jolly Holiday Bakery.

This treat got so much love that Disney turned it into a donut. Game changer.

You can’t officially say you’ve been to Disneyland until you’ve had a Mickey Bar. Their rules, not ours. While we might be joking, this life-changing ice cream bar is a must when you visit the parks. They even made it into a candle scent!

You can snag one of these treats at a cart or a freezer throughout Disneyland and the surrounding resorts. Vanilla ice cream coated in chocolate just tastes better when it’s shaped like Mickey Mouse right?

After walking multiple laps around Disneyland, sit down at Cafe Orleans and order the Monte Cristo sandwich. They take a ham, turkey and Swiss cheese sandwich and deep fry it before serving it with berry dipping sauce. It may seem out of the ordinary, but this salty, sweet combination will totally surprise you.

The Monte Cristo was adapted from the classic French sandwich called croque-monsieur. But obviously, deep frying it and dipping it in something sweet gives it that American flare. Disneyland has been serving this classic sandwich since ’66. Be sure to take some time to enjoy it with a coffee before continuing with your Disneyland adventures.

If you’re feeling a little fancy, you can also find it at Blue Bayou Restaurant.

Of course, this list wouldn’t be complete without what some might call the “true treasure” of Disneyland. Feast your eyes (and your mouth) on an extra large smoked turkey leg that you can find at hot food carts throughout the park.

This tender and smoky turkey leg may look unusually large, but for $14.50 ($10.99USD), this baby can feed a family of four. We recommend grabbing one before you leave the park as you’ll probably slip into a food coma after eating it. 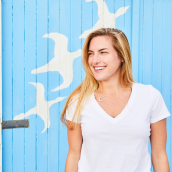 Marina Nazario is a freelance writer with a one-way ticket around the world. She's probably drinking coffee and searching for her next flight. You can follow her travels at marinasmilestones.com.

Exploring Ningaloo: A Complete Guide To Australia’s Other Great Reef

How To Spend 48 Hours In Port Stephens