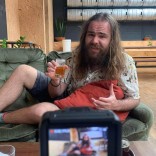 In Sydney’s inner west, beneath the roar of the flight path, new breweries seem to pop up every time a warehouse stands vacant for more than a minute. Most notably this change has been taking place in Marrickville, which some have dubbed The Golden Triangle for its increasingly crawl-able string of no less than seven breweries — the newest of which is the politically savvy Bob Hawke Beer & Leisure Centre.

In 2017, two homesick Australians returned home from New York with a mission: to have a beer with former Prime Minister Bob Hawke. Not only did they manage to do so, they set up Hawke’s Brewing Co with the man himself. Five years later, Hawkey is with us only in spirit but his legacy is imbued in every visual, and drinkable, facet of the new Beer & Leisure Centre. As the name implies, this brewery is deliberately daggy, with décor that whisks you back to the ’80s with such authenticity that you’d almost be forgiven for lighting up a dart indoors. The rear Pool Room features vintage furniture, a free pool table, and a wall of Bob Hawke memorabilia, including the flag clad suit he wore after Australia’s historic America’s Cup win.

Perhaps most eye-catching of all in this living tribute is the Lucky Prawn, the brewery’s Chinese-Australian kitchen. Red and gold lettering, vinyl chairs, and those brown bowls of prawn crackers immediately evoke memories of the type of regional Chinese bistros that kept punters well fed between slaps. The food has been elevated more than a touch with classics like prawn toast, spring rolls, and dumplings made with fresh ingredients, evoking happy memories without the indigestion. And, of course, as the name implies there is beer. Oh yes, there is beer. At the Beer & Leisure Centre, you won’t find the whacky beers Marrickville has become famous for, but a classic core range of beers that include a kickstarting lemon squash sour, various IPAs, and the PM-certified Hawke’s Lager. Grab a tasting paddle for $12 if you can’t decide or check out their cider and wine range if beer isn’t your thing.

When Bob Hawke agreed to lend his name and image to the brewing venture, he declined to take his royalties, which have been diligently donated to Landcare Australia, the environmental non-for-profit Hawke established long-term funding for in 1989. To date Hawke’s Brewing has donated over $300,000 to the organisation. Furthering Hawke’s environmental efforts, the Beer and Leisure Centre features a water refiltration system in the brewery, solar panels that can power the whole venue on a sunny day, and a hydroponic farm that absorbs all their CO2, all while growing lettuce for their signature san choi bao.

Contrary to what you might think, the Bob Hawke Beer & Leisure Centre is not just another Marrickville brewery. It’s a minutely detailed masterclass in Australiana that might even manage to evoke patriotism in the most hardened anarchist. 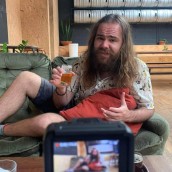