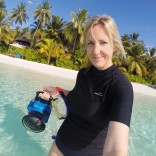 Lisa Michele Burns is a travel and underwater photojournalist. She…

Two New Banksy Works Have Popped Up In London

Formed anew as winter approaches, the ice caves of Vatnajökull Glacier in Iceland are frosted wonders.

With a surface area of 8100km squared and an average thickness of 400m, Vatnajökull is Europe’s largest ice cap, with active volcanoes and mountains resting beneath. Further down still is where the ice caves exist, one of the most impressive natural phenomenons you’ll come across in Iceland.

Vatnajökull National Park is in Iceland’s south-east. If you’re visiting the famously photogenic Jökulsárlón Lagoon, you’ll find you’re actually looking at a collection of icebergs that have broken off from the Vatnajökull Glacier, so you may as well go a little deeper, right?

Getting to the caves requires a beastly 4×4, the type with monster wheels to handle the deep snow and winter conditions only Iceland can conjure up. It’s an adventure in itself, but one that the local guides handle as if it were a regular tarred road.

Gearing up with thermal clothing, shoe spikes, helmets and cameras, visiting the ice caves is an exhilarating experience. Deep maze-like formations are found within crevices and naturally carved sections of the glacier, two of which are reasonably easy to access — if you’ve got the right guide.

A tunnel-like entrance with snow-covered steps leads down into the Crystal Cave, which wows at first sight. Gradually getting smaller the further you explore, the cave dwindles down to a cone-like ending where the Icelandic folk tales of elves seem completely possible. Natural light from the entrance illuminates the walls and ceiling, meaning you can see bubbles formed centuries ago through the exceptionally clear ice. The caves are somehow dappled in more shades of blue than you’ve probably ever seen before: depending on the light and its direction, you’ll find patches of deep, dark blue through to pale baby blue and almost pure clarity.

It can get a little busy inside the Crystal Cave, so it’s worth asking your guide how many people they take at a time and what times are best to avoid crowds. The more people inside, the less natural and untouched it feels, so plan ahead to try and visit in off-peak times. For the more adventurous explorers, the Waterfall Ice Cave offers a unique and more rugged experience. Following a 30-to-45-minute hike, some rope work and scrambling down into the cave over slippery rocks, hikers are rewarded with a scene so mesmerising it’s hard to believe it’s real.

Droplets of freezing cold water drop on your helmet and a ceiling of bubble wrap-like patterns sparkle with the sunlight. Not only are the sights spectacular, but the sounds, too. Named the Waterfall Ice Cave for good reason, it’s reformed each year around a waterfall that flows from the surrounding mountains and in through the edge of the glacier. With the sound of glacial water gushing over pebbles and cracks of ice, it’s an experience for every single sense. As access is a little more difficult, a visit to the Waterfall Ice Cave is one of pristine, isolated wonder. Only small groups are allowed in at any one time and you’ll find your guide regularly checks its stability due to the constant presence of water, particularly at the end of the season. It’s scary, stunning and awe-inspiring natural beauty squeezed into one shimmering cave.

Photographing inside the caves can be a little tricky due to the low light conditions but if you’ve got a tripod with you, be sure to take it with you. A wide angle lens is also a great way to showcase the enormity of the natural formations and capture the caves from every angle, including above! Tours run daily from Reykjavik, or you can drive yourself to the Vatnajökull region (roughly four hours) and join a tour at Glacier Adventures in Hali (tours start at $240 per person).

Having your own car provides the flexibility to make plenty of photo stops along the route from Reykjavik, which is filled with numerous waterfalls, gorges, black sand beaches and volcanic lava fields. It’s definitely worth allowing two to three days to cover the route to the Vatnajökull region, especially if you’re into photography and want to make the most of the many of sunrise and sunset opportunities.

The ice cave season is fully dependant on the weather conditions, but typically lasts from mid-November to mid-March. 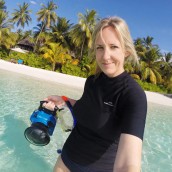 Lisa Michele Burns is a travel and underwater photojournalist. She publishes a guide to the world's most photogenic locations and outdoor experiences at The Wandering Lens and regularly hosts photo tours in destinations like Iceland, Japan and a little closer to home in Australia.

Two New Banksy Works Have Popped Up In London