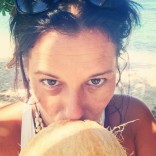 Kate Webster is a world traveller, ocean lover and conservation…

A short two hour and 40-minute flight from Brisbane and I touched down in Mount Isa, some 1880kms from my home on the Gold Coast. It felt like I could be in a different country.

Instead of surfboard-carrying beachgoers in boardies and thongs, I was surrounded by boot-wearing, buckle-toting cowboys. Sandy beaches were replaced with red dusty roads and it felt as though someone had sucked all the humidity out of the air.

Described as an oasis in the Outback, Mount Isa is a thriving hub in the Gulf Country region of Queensland, Australia. Set on the banks of the Leichhardt River and nestled among the ochre-red Selwyn Ranges, this mining town was born of the mining boom back in the early 1900s. The town is divided into what I’m told is the ‘town side’ and the ‘mine side’.

My first impression of the town left me feeling warm — and not from the weather, which had dropped to a chilly 10 degrees in the evening. It came from the colourful sunset that greeted my arrival and the welcoming locals who proudly showed their affection for their hometown.

The historic towns of Mount Isa, Cloncurry, and Julia Creek form part of the Outlanders Way, a 1100km stretch of road overland from Townsville to Mount Isa. It’s a veritable timeline of Australian history from the dinosaur era right through to the pioneering past.

The Mining Town Of Mount Isa

Starting my journey in Mount Isa, I put on my hard hat and descended into a mine via the Alimak Cage on the Hard Times Mine tour. Escorted by a miner who has worked in the mines for most of his life, the tour came with many an entertaining story of the good and hard times in the mines. Trying my hands at the air-leg drill to feel the earth rumble with the firing of the blast face quickly reinforced the fact that a miners life was not for me.

More my style for unearthing treasures, Riversleigh Fossil Discovery Centre showcased the fossils from the Riversleigh World Heritage Area. Here I found one of the most significant fossil deposits in the world and the centre tells a unique story of the evolution of Australia’s wildlife. Interactive displays let the palaeontological experts tell you their stories of Riversleigh, or you can wander through an impressive diorama to see what this ancient world looked like 25-million years ago.

Continuing with the underground theme of exploration, the next stop was the Mount Isa Underground Hospital and Museum. After the bombing of Darwin hospital in 1942, precautions were taken to protect the Mount Isa district hospital in the event of an air raid. The Underground Hospital was carved into the hills near the base of the regional hospital and remains Australia’s first and only underground hospital. I didn’t need a hard hat to explore the four tunnels that are fitted out to resemble the 1942 original layout, but the cup of tea while hearing the stories of the above-ground tent house was a must for the afternoon.

Travelling east of Mount Isa along the Barkly Highway, you will find the Heritage Trail. I am mesmerised by the landscape alone here — spinifex-covered terrain and rocky outcrops millions of years in the making. The trail journeys past the site of three former townships that boomed in the early 1900s mining industry, and to the waterhole oasis of Fountain Springs. This waterhole sits at the base of a spectacular towering rock face of quartzite with a split through its middle. It is a place of cultural and spiritual significance for the Kalkadoon people, dating back tens of thousands of years.

The next stop was the town of Mary Kathleen on the Old Mary Kathleen Uranium Mine Tour by North West Tours. Mary Kathleen was established in 1958 when the nearby Uranium Mine started production. The uranium in Mary Kathleen mine was exhausted by 1981, and the town and its people soon became abandoned. All that is left today are the concrete slabs where the original buildings stood, remnants of the town’s layout and the mine itself.

Where to stay
The Redearth Hotel is a piece of Mount Isa history, adjoining what’s now known as the Isa Hotel, which dates back to 1926. The Isa Hotel was built on the corner of Miles and Marian street by Samuel Allens and his team of tradesmen in a time when the mining town was booming. The hotel originally boasted coffee and dining rooms, a saloon bar and lounge, and a billiard room on the ground floor, with twenty-three bedrooms with balconies upstairs, plus stables and a garage at the rear. Today, the hotel still keeps its charm with an old-time heritage mixed with a splash of luxury.

No Need To Hurry In The Curry

Known as ‘The Curry’, Cloncurry is just under 1.5 hours drive from Mount Isa. It is worth spending a few days here instead of just passing through. Conclurry was put on the map being the birthplace of the Royal Flying Doctor’s Service. The John Flynn Place Museum and Art Gallery celebrates an era when aviation and radio united the Outback, and the Royal Flying Doctors Service provided a welcome health service for its residents. I was surprised to learn about Arthur Affleck, the first flying doctor pilot, and his story about how he hired a single-engine timber and material plane from Qantas for the first Royal Doctors flight. Clinging to my phone, I suddenly appreciated the technological advances in communications and air access.

Feeding my historical thirst, along with a cold beer at the Central Hotel Cloncurry, I went in search of a famous water bottle that I had heard can be found in town. At the Cloncurry Unearthed Museum, you will find an array of treasures from an extensive gem and mineral collection, information about fossickers licences and maps and of course, the water bottle. Early pioneers Burke & Wills passed Cloncurry on their ill-fated expedition and on that journey, Burke left behind his water bottle. It was moved from its final resting place out bush and now sits in the museum along with stories about their explorations.

Where to stay
The Gidgee Inn his unique, with rammed earth walls that you will be tempted to touch. Built in 1997, the rammed earth uses Cloncurry’s rich red soils, giving a sense that you are staying underground. This Australian styled 4-star motel also features a bar and grill, making it a great stop in this regional hub

Julia Creek And Nearby Mckinlay

In the Shire of Mckinlay you will find the quaint town of Julia Creek. What it’s lacking in size, it makes up for in atmosphere. Before settling into an afternoon in Julia Creek, head on out to the neighbouring town of Mckinlay. You won’t be disappointed.

A town of approximately 14 people, you would think there might not be much going on here. As tumbleweeds rolled down the main street, I wondered why anyone would visit such a remote town. Until I saw the town pub, Crocodile Dundee’s Walkabout Creek Hotel. This pub was the backdrop for the famous bar brawl scene from the blockbuster movie Crocodile Dundee, and much of the town also featured in the movie.

Surprisingly, I didn’t see any creek on my visit, but I was told there are two water holes near Julia Creek that make for ideal swimming, fishing, bird watching, and picnicking. One is on the Flinders River called Punchbowl Water Hole which is 45-kilometers northeast of Julia Creek and the other is Sedan Dip, 100-kilometers north of Julia Creek.

I did however find a magical place to take a dip, or should I say, a bath. The Artesian Baths at Julia Creek Caravan Park is possibly one of the most unique experiences you will find out here. Jump in and relax as you watch the sun set over the glorious landscape all while enjoying a cheese platter and a glass of wine (or poison of your choice). The bath areas are private and built with wood and corrugated iron to give you a true outback bush bathing experience.

Just before the sun dipped below the horizon, I made my way to the iconic large windmill to relish in the dying light and reflect on my time in Julia Creek.

Where to stay
Julia Creek Caravan Park is where you want to be in Julia Creek. It caters for caravans, motorhomes, camping, and even has self-contained units. The visitors here rave about the award-winning Bush Dinner nights each Monday night, where local produce is cooked by a local non-profit community group, and you can catch a live gig or hear a local yarn told by a true blue outback Aussie while sat around the campfire. All for just $15 per person!

The author travelled as a guest of Tourism and Events Queensland. 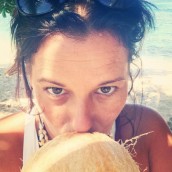 Kate Webster is a world traveller, ocean lover and conservation warrior who is determined to make every moment count for not only herself but the world around her. This has inspired Kate to translate those moments and share them through her storytelling as a travel journalist.