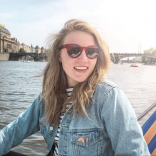 If someone asks you to name the coolest city in Australia, I’m almost certain your mind wouldn’t go to Adelaide. For many years of my life, I would have agreed with you. I always saw Adelaide as a daggy, boring city, with not much going for it except good wine.

That all changed when I went there on a work trip three years ago. It’s certifiably cool now, so much so that I’ve been back five times since then. Maybe Adelaidians have been trying to tell us this for years and we just weren’t listening? Either way, I was straight-up impressed with the city.

So today I’m here to get you to jump on board the Adelaide-Is-Cool train — here’s why.

Walking around the CBD and inner suburbs has a much more laid-back vibe than Sydney and Melbourne. It’s not quite ‘smile at strangers on the street’ energy, but it’s close.

Also driving and parking in Adelaide was hands-down the most stress-free car experience I’ve had in my life. There’s basically zero traffic, even at peak hour, parking is never more than $4 an hour (if not free), and other drivers will let you into their lane the second you indicate. Sydney would never.

The food is excellent

For me, one of the main reasons to travel anywhere is the food, and oh boy, the food in Adelaide is GOOD.

First off, there’s the Adelaide Central Market, which is packed with shops selling any kind of local produce you can imagine. Fruit, cheese, meat, jam, seafood, baked goods, veggies — all the best you’ve ever tasted. Inside the market you’ll also find an Algerian cafe called Le Souk. I went there with a French Algerian who told me it’s the best food he’s had outside home.

In the city you’ll find Kutchi Deli Parwana, which serves up Afghan food in a tiny but beautiful jewel-toned space. Just next door is a cute French spot called Hey Jupiter that’s an excellent spot for day drinking and food. Honki Tonki is a must-visit for noodles and dumplings, conveniently located right near the best bars in the city.

If you’re a fan of a bougie brunch (and who isn’t), hit up the trendy and monochromatic Crack Kitchen (it’s filled with plants and looks like a millennial’s dream) or Cafe Komodo in the hip inner-city suburb of Prospect. Out by the beach, C.R.E.A.M. in Brighton looks like it’s been lifted straight out of Melbourne, and 303 By The Sea at Henley is beachfront brekkie at its finest.

Finally, I have to mention the no-frills Bakery on O’Connell. They’re open 24-hours and make delicious sausage rolls and pies, and vegan doughnuts as big as your head.

The nightlife is surprisingly good

I mean no offence when I say this, but I’m constantly surprised by how good the bar scene is in Adelaide. It’s certainly smaller than it’s big-city counterparts, but that just means it’s easier to do a cute pub crawl without having to walk kilometres and lose your buzz.

If you’re after trendy bars and good cocktails hit up Leigh Street, a skinny alleyway packed with hotspots.

Pink Moon Saloon looks like a tiny alpine wood hut, but has some of the best cocktail creations in the city. A couple of doors down you’ll find Udaberri, a Spanish joint with a long wine list and well-priced delicious tapas. Across the laneway, Casablabla is a high-energy cafe/bar with bizarrely eclectic decor — nab a table outside for great people-watching.

The next street over has Maybe Mae, a well-hidden but lively cocktail spot with delicious cosmopolitans (yes, I drink like it’s 2003), and other laneway bars with outdoor tables for a sun-drenched afternoon drink. The best part is that there’s a Macca’s at the end of these alleyways, perfectly placed to soak up a night of drinking.

Once you’ve had your fill of trendy cocktail spots, you should definitely hit up the Exeter pub in the CBD for a more low-key night. It’s a classic grungy pub with graffiti-covered bathrooms, cheap drinks, and plenty of outdoor tables. It’s the perfect place for one of those nights where you think you’ll just have a couple of beers but end up doing shots at 2am.

You can get in touch with nature

Because Adelaide is a pretty small city, it’s very easy to get out into nature, and there are some epic hikes and parklands to explore. There’s the iconic Mount Lofty, which is a local fave and can be packed on weekend mornings. It’s an hour-ish hike up to the top, where you’ll get amazing views of the city and might even spot a koala or two.

Otherwise head to Morialta Falls on the eastern edge of the city, for stunning waterfalls and a bunch of different hikes of varying difficulty. It’s definitely one of the most insta-worthy places in the city.

And OF COURSE there are the rolling wine regions surrounding Adelaide – the Barossa and the Adelaide Hills. Take a car and drive yourself around, or better yet book on to a surprisingly inexpensive winery tour and drink to your heart’s content.

If you’ve got a bit of time in the area, the number of day trip opportunities are endless. Second Valley, just two hours south of the city, is a local fave for a mid-summer weekend away. It’s got beaches with white sand and turquoise water, as well as caves to explore. Kangaroo Island is a little further south, but of course is worth a couple days. Or drive out to the Yorke Peninsula for more wineries, empty beaches, awesome hikes, and an all-round good time.

It’s the perfect place for a long weekend getaway

If this list hasn’t piqued your interest, I truly don’t know what will. All I can say is that Adelaide is awesome, and definitely deserves at least a few days of your time. Avoid it in winter, as it gets pretty damn cold. Though the summers are hot, it’s a super dry climate so you won’t sweat through your shirt in ten minutes like you do in Sydney or Queensland.

Accommodation is cheap, the wine is plentiful, and the vibes are good. I promise you’ll love it.

Why You Need To Visit The NT’s Other Natural Wonder, Kings Canyon